Madden 21 has a new cover with no other than the leagues MVP Lamar Jackson! Lamar Jackson had a historic season shattering Michael Vicks rushing records. He is well deserved to be on the cover of Madden 21!

Lamar Jackson also was made the fastest player in Madden history at the quarterback position. We will have to see what ratings EA Madden NFL 21 gives him in August! 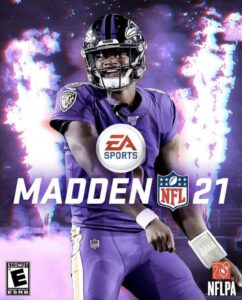